Because life depends on us™ 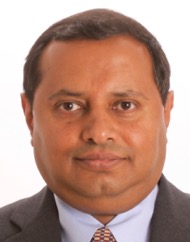 Dr. Ravi Kiron has over 30 years’ experience in academia, pharmaceutical and biotechnology, most of which has been spent in strategy, licensing, M&A and business development leadership roles.

Even though his company maintains an office in Menlo Park, California, he is only there once or twice a week.  Most of his work is with colleagues, clients, collaborators and connections, who are spread around the globe, so his key tools are phone/video calls, webinars, emails, and information review discussions, with periodic travel to conferences, scientific meetings, and the like.

Because of this, as he described it, “I am actually probably one of the few people who already normally works from home.”

However, this arrangement still presents challenges – primarily due to the world at large situation, rather than with any aspect of home office technology, scheduling, unexpected space sharing with family members, etc.

But in this COVID-19 environment, in-person interactions have stopped.   That stoppage has curtailed and seriously stymied the give and take of scientific conversations and deal making.

“I have a vast global network and existing relationships,” Kiron continued, “but newcomers to BD are finding it exceedingly difficult.  It’s a new world for them to “connect” with people and establish trust”.

“If only two of a thousand ideas are selected for investment, it can be likely that those two already had a relationship with someone.  New BD professionals are at a disadvantage right now because of that.”

Even though face-to-face conversations are few and far between, Dr. Kiron sees a silver lining.  “It can be that I might have a better conversation on the phone with someone, rather than competing with 20 people at a meeting who want to speak to the same person.”

All said and done, Dr. Kiron looks forward to going back to a world, albeit with the new normal of reduced social interactions with people, and reconnecting with the industry and executing on ground-breaking and game changing deals for the future of humanity.

By submitting this form, you are consenting to receive news and event information emails from: Bio Supply Management Alliance (BSMA).  You can revoke your consent to receive emails at any time by using the SafeUnsubscribe® link, found at the bottom of every email. Emails are serviced by Constant Contact.
***********************